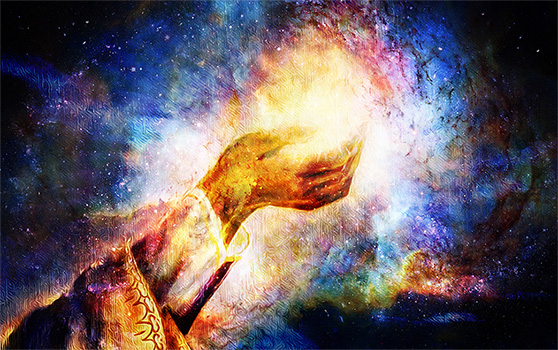 Humans exist within the visible (to the human eye) portion of the electromagnetic spectrum. This spectrum is a measure of light calculated by the distance between light waves and how frequently they pass a certain point per second.

Researchers, supported by electromagnetic measurements, distinguish eight major aspects of the energy network in humans, one of which is the aura, the fundamental energy shield emanating from and surrounding us.

The auric field functions as a protective buffer against external negative energy and can extend from 2-9 feet outward in every direction. It changes in color, brightness and size depending on your physical health, thoughts and feelings, and it can grow brighter and stronger with consistent healthy body/mind/spirit practices such as meditation and breathing.

The human eye can only see a narrow range of wavelengths, between 0.3 and 0.7 micrometers, which we perceive as color – from red to purple. Specific colors may appear with different tints when seen in the auric field and they can range from clear and bright to pale or even muddy depending on the health of the organism.

The relation of color to the science of the light spectrum can be explained as follows:
Light energy is interpreted as physical form and is seen through the physical eyes as color. The energetic boundaries of color, form and light are therefore perceived by us as immediate reality.

But what we perceive as color is just an illusion – only the energy itself is real.

The colors we see are visible light, bent or refracted into a spectrum sequence ranging from short to long wavelengths: violet, indigo, blue, green, yellow, orange, and red.

So is it actually the color or the light that affects us?

While we perceive individual colors within the visible light spectrum, it’s actually the light energy that affects us physiologically and psychologically. This is why you might catch good or bad “vibes” from someone. You’re effected by their energy even though you can’t see the color of their aura.

In 1927, Dinshah Ghadiali published his Spectro-Chrome Encyclopaedia in which he explained the physics of chromotherapy based on scientifically verified experimentation. He based his theory on the belief that unique colors (energy waves) have an effect on the frequencies of specific organ energies. By understanding these frequencies, the organ’s energies could be manipulated and brought back in balance.

Today, chromotherapy is called photobiology and researchers are gaining a greater understanding of how light is one of our most important environmental inputs in controlling physical and mental balance.

And while an aura may be seen as color as a result of the body’s physical and psychological energy conditions, external visible color can have the same affect, influencing mood, memory and health.

Within the past decade, experiments with how visible light energy affects us have proven successful.


It’s clear then that it’s the light energy that is effecting us, not our perception of the color we see as a result of that energy.

What is the Human Biofield?

Human energy is light energy, equal to quantum energy, with dimensions within dimensions, all made of subatomic particles and all in an excited state vibrating at varying speeds. The energy biofield is the blueprint network that links all our aspects: cells, organs, DNA, meridians, nerve channels, and mental frequencies. It behaves like a superconductor transporting energy just like an electric grid.

The aura or etheric field consists of several layers and is an extension of the human biofield. It emanates from the form into the ether or space. Picture a dense spinning light rod, which is not solid but made of tiny particles of light, which runs vertically through your body. It extends out through the top of your head and out through the tail bone. As it spins, electrical sparks fly from it through nerve channels, blood, organs, and skin. What is revealed on the outside is the extension of that current known as the aura.


While some scientists view the aura as subatomic particles or bioplasma; others suggest it’s a negative mass that allows a shift between this world and another. Perhaps it’s a combination of both.

In earlier times, auras were believed to be miracles. Nearly 100 different cultures reference the human aura, each culture calling it by a different name: astral light, corona, luminous body, halo, ring, aureola, and others.

But there is nothing paranormal in the universe. Everything is energy vibrating at various rates of speed. And we, as humans, are part of that universal mastery.