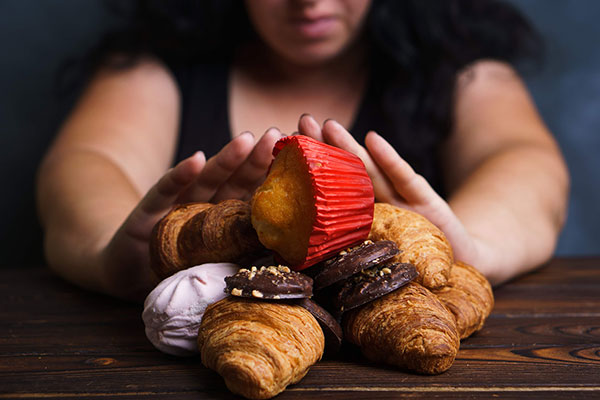 Understanding Food Addiction: Lose Weight and Keep it Off by Rewiring Your Brain

Food plays a vital role in our physical health and breaking bad eating habits is often difficult for many people. There is growing concern about world-wide obesity and its health consequences. But is obesity caused by genetics, overeating in general or simply by the types of foods we eat?

You don’t need to be obese to have a food addiction, but if you’re eating the wrong foods you may suffer from one.

Where do food cravings come from?

If you’ve eaten certain foods when you’re sad or lonely, bored or vulnerable to your emotions, those emotions become cues.

The brain contains what’s referred to as the reward pathway and the brain chemical most closely associated with the brain’s reward stimuli is dopamine. Your thoughts and feelings about your individual body image, shape and the value you place on yourself are all tied to the brain and its reward center neuro-circuitry. Activating dopamine tells you to repeat what you just did to get more reward, the reward being dopamine, the ‘feel good’ hormone.

Whenever you eat foods that make you feel good – your comfort foods – that action gets reinforced. Your brain will tell you to take that action again. When you think about that food, smell it or see it, your brain will remember the benefits you received from it – you felt good. But it’s really the subconscious mind that’s telling you to go for those foods again. Dopamine is the final affect, but the memory of that feeling is what you will have to overcome.

Because food has an immediate physical effect, eliminating problem foods can include physical withdrawal symptoms. But in the same way you can replace negative thoughts with positive thoughts, you can learn to replace negative unnatural foods with foods that edify your body rather than tearing it down and causing disease. You will detoxify your body and allow the prefrontal cortex to balance itself. In essence, you will redefine your relationship with food.

Much of what you consider comfort food began in childhood. Sugar is a great example. To make you stop crying, you got a cookie. Every weekend your grandmother baked pies. You felt safe and warm eating pie with the family. You felt blissful. Over time, if something went wrong in your adult life, you discovered that eating pie helped ease the emotional pain because it reinforced feelings of safety and comfort from your childhood. Reinforced feelings are imprinted on the mind.

At some point, the pleasure center in your brain needed more. The point of bliss, the point where your brain could determine you’ve had enough, was moved. The brain downregulated the amount of dopamine you received each time you ate a piece of pie, so over time you needed more and more pie to achieve the same amount of dopamine satisfaction. The end result is identical to the addictions caused by heroin and cocaine.

There’s no point in trying to use will-power to eliminate your comfort food addictions because you still believe they will make you feel good emotionally. You are among the 33 percent of people who are addictable or highly responsive to the cues that predict rewards. You’re sucked in by McDonald’s golden arches, the doughnut box or the chocolate commercial.

Manufacturers of processed foods add more salt, sugar and fat to their products to cause the brain to raise the bliss point. They’ve spent a lot of money researching this and they know what they’re doing. And as if that weren’t bad enough, artificial chemicals are increasingly added to processed foods to make them last longer, taste better and cause further addictions so you’ll buy certain products.

But food is the most important controllable factor in our health. Retraining yourself to eat good foods will take conscious effort and it all begins with your brain.

Why is it so hard to stop eating even when you’ve had enough?

Hunger, the kind that doesn’t get satisfied, has to do with leptin. Leptin is a hormone that tells your brain you’re not hungry anymore.

Coca leaves give a mild feeling of bliss, but ingesting cocaine, refined coca leaves, will cause an addiction. Poppies are generally harmless, but heroine, the refined version, can be deadly. Sucking on a piece of sugar cane or eating a whole grain is harmless but eating the refined versions can cause insulin spikes.

Sugar and refined flour raises insulin. Now, leptin is being blocked in the brain by insulin. In one study, genetically engineered mice with no leptin continued to eat until they died from overweight. We’ve taken wholesome real foods and turned them into drugs. If leptin is blocked, you literally won’t know when to stop eating.

So what should you eat?

Pretty much anything you want as long as it’s close to its natural state. Avoid food in boxes and read labels. Educate yourself.

Proteins. Every cell in the body contains protein. Proteins serve more physiological functions than any other nutrient, and include antibody, messenger, structural, transport, and enzyme proteins.

It’s the major component of muscle and cartilage, and the body breaks it down into simple organic compounds called amino acids. Protein doesn’t give you extra strength and is not the body’s first choice for energy conversion. It helps repair tissues after an injury, including the kind that occurs to muscle during a workout.

Carbohydrates. They provide energy as the digestive system changes them into glucose, also known as blood sugar, which can be stored for later use. A good rule of thumb is to eat more carbohydrates on the days you’re active or working out, and make sure they come from whole food sources. Whole food carbohydrates are often fiber-rich, with both soluble and insoluble fiber. They help create satiety and signal the brain to stop eating.

Insoluble fiber is indigestible and adds bulk to the stool, helping it pass through the intestines. Stick with unrefined carbohydrates such as fruits, vegetables, and whole grains.

Fats. Don’t skip fat. It’s a concentrated source of energy and serves as a backup to carbohydrates. Your brain is made of about 60% fat. Fat doesn’t make you fat as long as it’s the healthy type and you don’t eat too much. Eat unrefined oils such as olive, coconut, walnut, and sesame. Eat avocados, cold water fish, pastured meats and eggs, and raw nuts.

Don’t skip meals - Breakfast supplies us with nutrients that have been depleted over the course of the previous day and throughout the night. Including small amounts of protein with each meal and getting about 40% of calories from healthy fats will give the brain what it needs to function well.

Intermittent fasting - It’s always a good idea to detoxify your system from time to time. Reducing your caloric intake periodically and flushing with large amounts of liquids will get rid of manmade chemicals, heavy metals, and other pollutants. You’ll begin to “reuse” the calories that your body has stored in the form of excess fat. You might lose a bit of weight, and you’ll get rid of brain fog.

Stay away from empty calories. Decaf sodas, refined grains and sugars (cakes, cookies, crackers, refined flour breads), and alcohol will fill you up without giving you the nutrients you need. When that happens, you stop functioning correctly at a cellular level. Your body will ask you to eat more in a desperate effort to get the nutrients it craves. Result: you gain more weight and you get less healthy.

In general, consume most of your food in its natural, unprocessed state. Go organic if you can. You’ll eliminate artificial chemicals, pesticides and added hormones and steroids used in animals and their feed. You’ll eat less and eliminate cravings because the body is getting what it needs in terms of nutrition.

Plan your meals so you have to think about it before eating. Don’t rely on willpower. When you undergo a program to modify a deeply ingrained pattern of behavior, that effort over time makes your willpower more resistant to depletion. Will power might drain over the course of a day, on a vacation or when you’ve had a long week. But the habits you build become completely automatic after a while. At the times when you want to deviate, you’ll find you default to the program you’ve put into your brain rather than the old desires and addicted behaviors. When you say ‘forget about it’, you’ll find you do have the willpower to stick with the program. That benefit will spill over into every area of your life.

Just as thoughts become things (you’ve become what you’ve thought about most), so food helped shape your physical body into what it is today. And just as easily, you can reprogram your thoughts to change what certain foods mean to you. That doesn’t mean you can never eat your favorite comfort foods again. It means you can control your unfounded desire for them once you get past your physical craving. And this is where what you think about literally effects your weight.

Remember the pie story? You thought about it all day. Now think about something else.