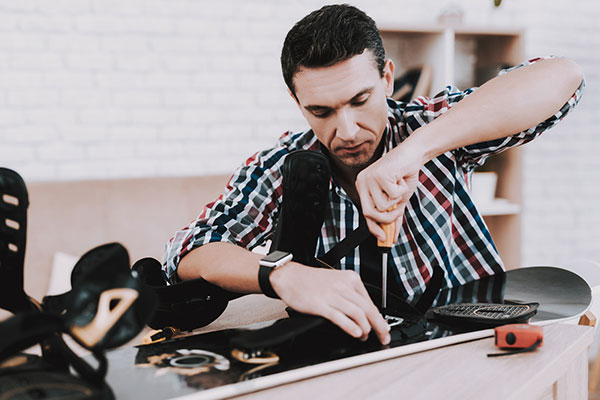 Procrastination: What’s Wrong with Your Approach?

If you struggle with time management, can’t seem to make a dent in your weekend to-do list, or simply feel overwhelmed with the duties of daily living, you may be suffering from a well-known malady: procrastination syndrome.

You’ve tried setting up schedules, willpower, planning, and everything else you could think of to get yourself moving, to get that book written, to finish painting the bedroom, or to take the kids to Disneyland like you’ve been promising for years.

You may have started several programs with enthusiasm, but after a few days felt overwhelmed and decided that you needed a nap. And you feel guilty just watching TV because you feel like you should be doing something.

Why do you do it? It’s called learned helplessness.

In a study by Martin Seligman done on intelligent animals such as dogs and elephants, it was found that when they were frustrated enough times in their efforts to avoid shock or escape their confinement, they eventually just gave up.

A full-grown 11,000 pound elephant, having been chained to an iron stake as a youngster, can still be tethered by a slender rope and it won’t try to escape because it has ‘learned’ that it’s useless to try.

In some sense, this applies to humans as well. Although we can figure out how to get out of a slender rope, we can’t understand how to get ourselves motivated enough to move forward. Learned helplessness feeds on itself, keeping you locked in endless illusions.

This is your thought process.

So what’s wrong with your approach?

There are likely many things you want to accomplish in your lifetime, some small and some grand, but you just can’t seem to manage getting to them. Your life may be in disarray or it may seem well-ordered from the outside. But nothing is fresh, new or exciting to you except the plans and dreams you have in your head that you don’t make happen.

Eudaimonia is translated from Greek as human flourishing and focuses on self-realization, an approach that has proven to be successful across all cultures.

Rather than relying on external inputs for happiness or pleasure, in self-actualization you’re not influenced by transient external inputs. You rely completely on creating experiences that bring you to your potential.

But the reason you’re ‘stuck’ is because you don’t know how to realize self-actualization, right?

Your ego is very protective of itself, does not want to lose control, and loves to resist change.

In other words, sitting on the couch feeling sorry for yourself, living in denial about your abilities, and covering up your lack of motivation by saying you’re too busy or too tired are all the product of your concept sequencing—this is your storyline—the book you’ve created.

These are the lines you’ve written; it’s your ego convincing you this is OK because you are too tired or too busy.

It may seem there’s no overall solution to procrastination, but there is. And it stems from dropping all your resistance. Don’t be driven by the idea that there’s a problem. When you do that, finding the solution becomes bigger than the problem itself.

Drop all resistance to changes and walk away from avoidance anxiety.

The greatest minds in human history have pointed toward levels of thought beyond our apparent limited structure.

Einstein said the true measure of a human being is determined by the measure and sense in which he has attained liberation from the self.

Thinking is a wonderful tool when the mind is in service to the heart, but the ego perpetually filters reality through language and labels and is constantly judging. It’s telling you to stay right where you are, you’re OK, you don’t need to do anything more.

In fact, the only solution to procrastination is to stop resisting change and embrace it. Stop expecting failure regardless of how many times your experience has told you you’ve failed. Question everything and doubt even your biggest fears. Stop giving them power.

Dropping resistance does not mean you condone one thing or another. It means you need to take a look at the possibility of success in the face of fear and learned helplessness. Your inner freedom depends on it.

People who procrastinate like the suffering they’ve created because it’s comfortable and easy to manage. But they’re living a gilded life where everything may seem great on the surface and inside they just dream of the day when they have the courage to go after what they want.

All you need is the courage to take the first step, and that is recognizing that it’s not you, it’s your ego’s resistance that’s filling you with the illusion of helplessness.

Ane just like Pavlov’s dog, you can rewire your brain by creating positive experiences that will reinforce your subconscious mind to believe you can do this, whatever this is for you.

So instead of avoiding things that seem like a chore for you, you’ll start to process that ‘chore’ as something positive, something you look forward to doing because you now know that your efforts will bring results. This is called behavior modification.

Don’t let the fear that keeps you from doing something turn into an exaggerated feeling of anxiety over its (your) success or failure.

How do you reduce your aversion to doing the things you need to do?

Start by targeting one area of your life where you want to accomplish something.

Say you want to write a book. Each time you sit down for a full ten minutes, for example, and write something (not just staring at a blank page or doodling), reward yourself with a cup of coffee or a short sit in the sun.

Every time you reward yourself, you reinforce a good action and your brain will be looking forward to that reward. You’ve stopped resisting getting it done and instead have made it a rewarding experience.

Don’t worry about getting too many coffees or cookies (unless you make it a bag of cookies each time). Eventually you’ll be able to do this without the rewards because the accomplishment itself will be the reward.

Set time limits at the beginning or you’ll start to feel overwhelmed again. This is how you build trust in yourself and your ability to stick to something for a designated period.

Don’t make your time limits too long in the beginning and stop when you said you would. Next time, your brain will understand the trust you’ve built and won’t object to the time you’ve designated to do the task.

This is how you will develop a routine.

Ending procrastination may take a bit of willpower, but mind over matter isn’t about forcing yourself to do things you don’t want to do or suffering because you can’t get done the things you do want to do.

It’s about understanding that you’ve been resisting doing things because of your fears.

You don’t believe you can accomplish something or keep things organized, so you become easily overwhelmed. But there’s no need to suffer this way.

The more your resist doing something, the greater the problem becomes in your mind. And just like the 11,000 pound elephant who is tethered by a slim rope, you’ll spend the rest of your life dreaming of the Savanna when you could be living on it.